Group chat alone isn't enough. Basecamp combines *all* the tools teams need together in one place: message boards, schedules, to-do lists, group chat, documents & file storage, and more. Instead of stuff scattered all over, everything you're working on will be in one streamlined, organized place. Everyone will know what to do. Nothing will slip through the cracks. You'll always know exactly whats going on. 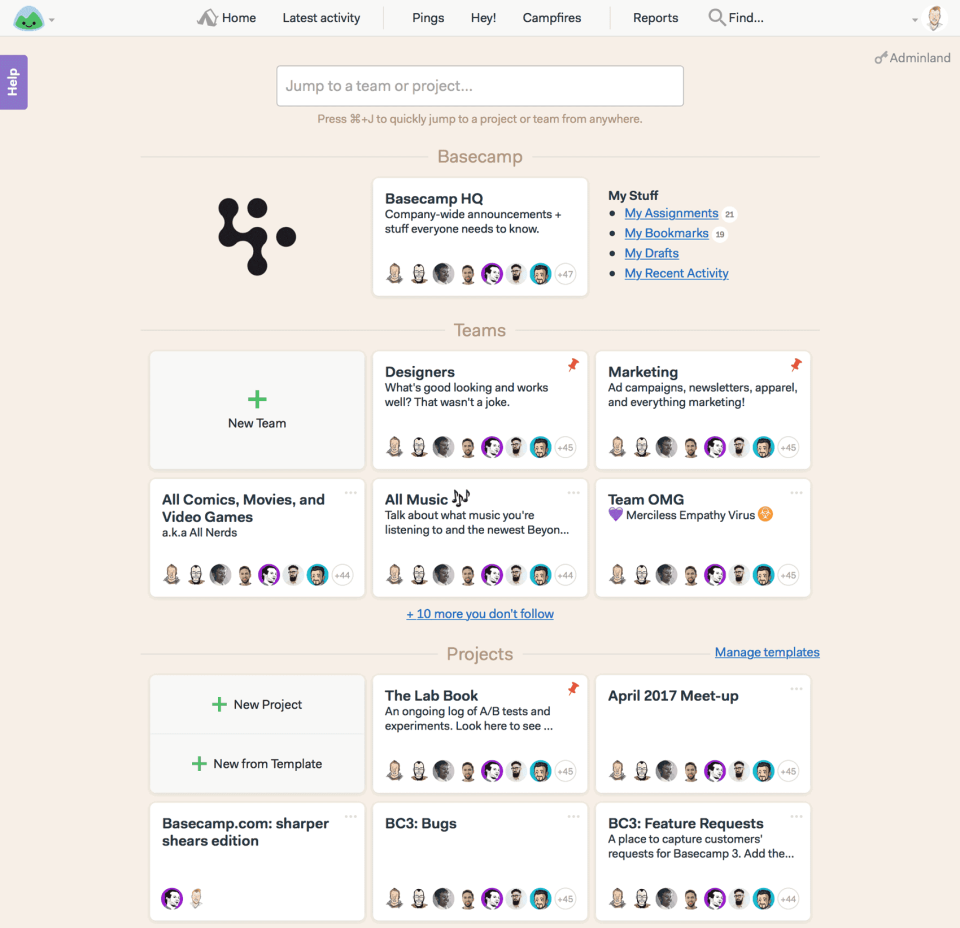 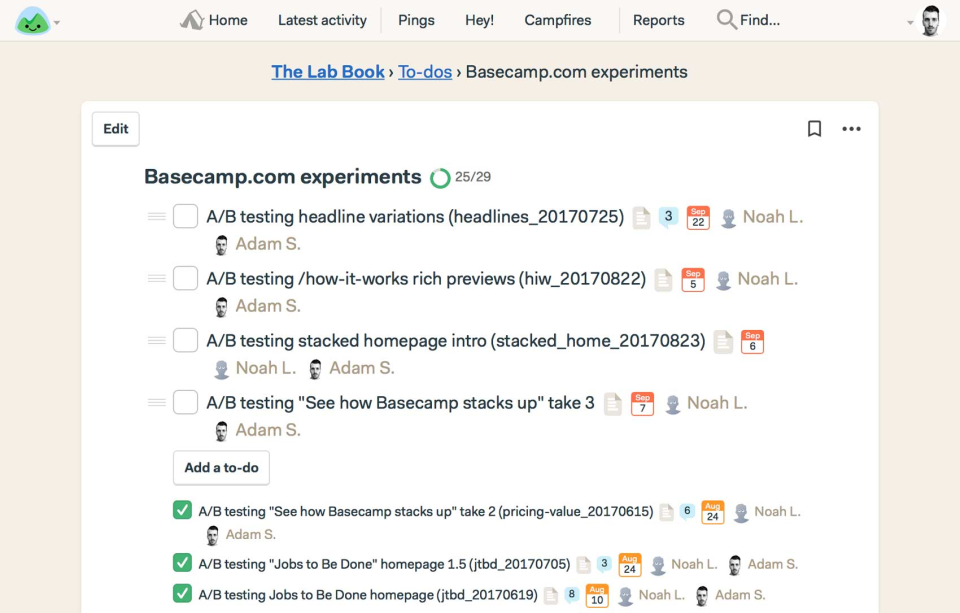 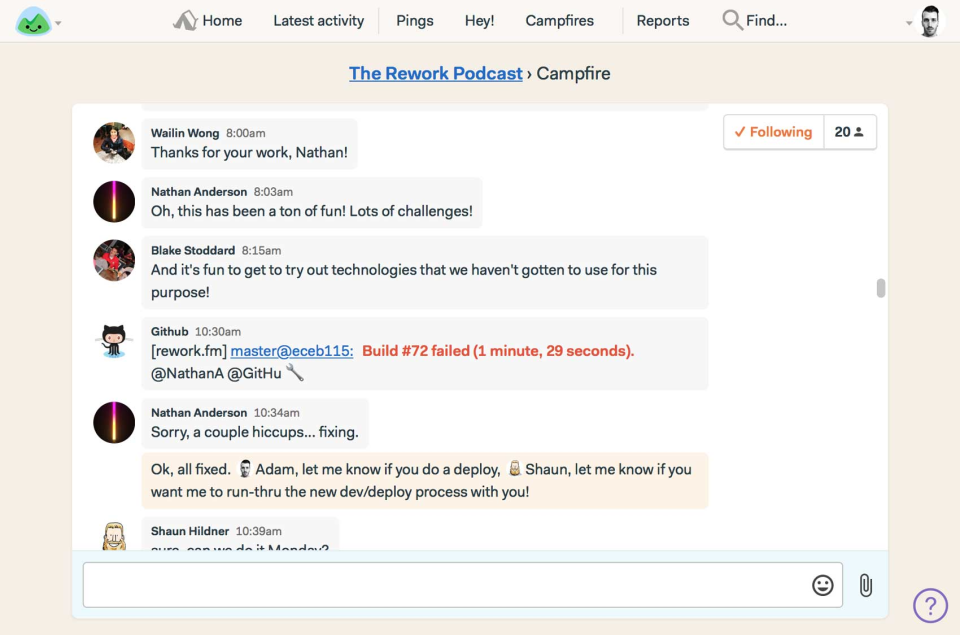 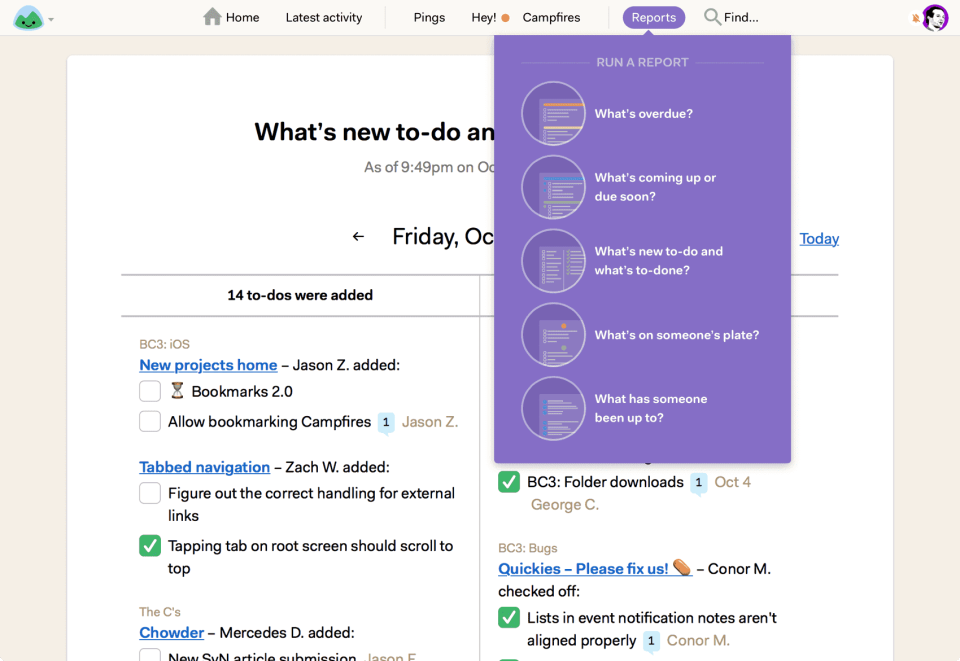 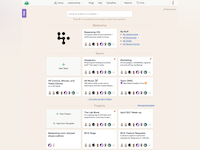 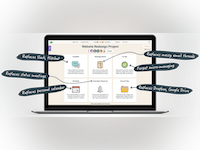 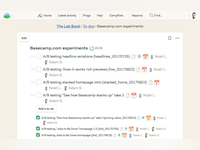 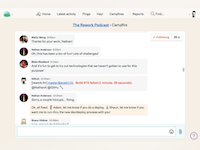 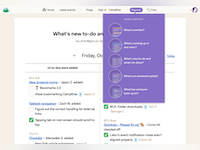 Kommentarer: What i have realize with Basecamp is, we have improve the way my team communicate. We have ditch from using email or other messenger application, and mainly using Basecamp as our communication platform. It is effective because we can quickly pinpoint the subject of our discussion and attaching document to it.

Fördelar: Tracking for a project progress by team members and keeping a quick communication contact with my colleague is easy to do with Basecamp. Its workflow method to managing many project that are running at the same time is flawless. Separating each team members roles and their responsibilities towards the project only need a single click.

Nackdelar: The feature tools name is quite funny, they use term 'campfire' to indicate messenger board where people gathering for discussion. There are some integration that are not well connected, my integration with google calendar is choppy and some of my calendar event is not properly exported to Basecamp calendar.

"Basecamp allows me to track my team's progress easily and efficiently"

Kommentarer: I've used Basecamp for my team for several years now. The communications solutions, file management services and archival features are all excellent. As an administrator and user, I highly recommend Basecamp for any organization with several ongoing and simultaneous projects.

Fördelar: Basecamp is a project management solution that allows me to stay on top of my team's projects with ease. Projects can be categorized and organized so that only members working on a particular project are exposed to the communications and back and forth. We use Basecamp as our primary solution because it is easy to implement and onboard, simple to use and has a robust set of features that are among the best in the industry for what we need.

Nackdelar: My only complaint is that the different versions of Basecamp have different features. For example, the version we use does not allow for time tracking. While this is not necessary, as we don't bill out by the quarter hour, it would be a nice feature that would allow me to better understand how long certain tasks take my team members. If Basecamp had universal features across all versions, this would be a miracle solution.

Kommentarer: Overall, Basecamp is a solid product that I use almost daily to manage projects. I haven't had any major issues with the software but would like to be able to easily reference tips and tricks to improve my workflow.

Fördelar: The ability to collaborate with other people on my team on task management is critical to making sure the work is done on time. Basecamp also allows me to communicate with clients and vendors on project specifics tasks and goals which means less time writing emails and more time getting things accomplished.

Nackdelar: The user interface is a little too bare-bones, and things aren't always intuitive. I would like to see more tips on how to set projects up and manage them properly.

"I'm not sure if it's the same people on this one, since there are different versions of this gig sw"

Kommentarer: For the fact that it's an app on a major app store, I would have obviously come across it, for the fact that it was something of some form of various thing that I would come across in categorical and ad hoc searching, as it turns out. Aside from not understanding what the purpose of the software was, based on the description that was included in all of the versions in the App Store, I found it particularly disparaging to the community that they framed the purpose of the app as an occupation and dump in of trucks and trailers, and tons of people from out of town, on any given day, whereas the trailers were there in supposition that they were showers that were provided to the homeless, on one day. On one hand, they're not there every day, but on the other hand, it was a bit strange that this ended up being what the app is about.

Fördelar: In essence, I suppose that this app seems a bit in opposition to the browsing app store user coming across it and then, at some point, upon trying to understand what the portent of the impact of the software is, fairly soon turns up browsing through more apps, wondering what this app is about; particularly to have 3 release versions of it, at this point in time. Regardless, it turned in to a yellow sign "base camp" social work news article publication thing for the sake of publicizing push material of support for what ended up being a seething attrition for the locals of the area where the "base camp" installment of "obviously, it's on account of the app in the app store thing," and on top of that, there was significant opposition to me as a mental health client recipient of services (supposedly), just tangentially, and for a few times, perhaps, of this art therapy group of people, and then they talked and acted out towards me in my head, outside of any sort of professional or service provider and client circumstances.

Nackdelar: I feel like the spirit of development in software, for the purpose of disparaging the client, of a completely different and separate supposition of relation, whatsoever, in regards to the original purpose of meeting with these developers, is simply wrong and unprofessional. These developers cause a significant problem in a different locality between people who are not housed in downtown Los Angeles, on the incident that happened witnessed, and whatever the story was in my head about what anyone might think about such an influx of people in to the area, which is all too common, in various ways; On top of that, they're plotted right at 222 S. Hill St. 7th floor, Los Angeles, CA, 90012, and they do events of disparagement against me and my family commonly, while trying to suppose that their self esteem is supported and is superior, while homeless and mentally ill bullying and stalking victims are inferior, on account of group brute strength over an individual. They run ostensibly false and slight charity drives for supposedly unfortunate other people.

Kommentarer: I mainly use it to collaborating on project with my team members which working on the other branches. We can communicate and work on the same task in real-time and making the project collaboration process very effective.

Fördelar: The feature and menu is perfectly placed in the software dashboard. I can easily find the tools that i need really fast and that has speed up my work progress. All my project and the progress can be tracked by the visual percentage thus make it more easier to know the project level of completion.

Nackdelar: Basecamp tools for task management is somewhat lacking because there are no tools to managing a complex project that need many resources for the project. The software dashboard and overall design is too old and very unappealing compared to other software that has more modern looking software design.